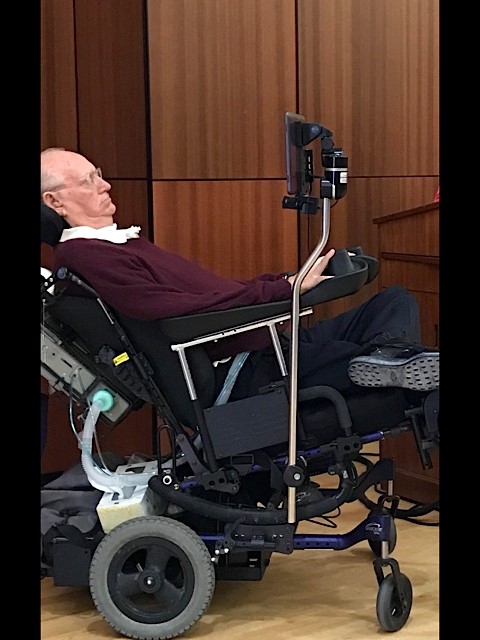 As Americans struggle to adapt to various forms of isolation, I live and breathe my own imposed form of isolation every day.  I am an 82 year old who has been living with ALS (amyotrophic lateral sclerosis) for the past 27 years; like Lou Gehrig, I consider myself “the luckiest man” because I can work virtually and share my story during these troubling times.

I live with a life-support ventilator, a stomach feeding tube, a tracheotomy and a coughing machine (which clears my lungs).  Since 1998, I have spent all my waking hours in a wheelchair – unable to move my legs, arms, hands, fingers or my neck.

ALS is a neurological disease that controls the body’s nervous system, which in turn activates the muscles, both voluntary (arms, legs and abdomen) and involuntary (such as swallowing and breathing). The statistics say that 97% of people afflicted with ALS choose NOT to live with a life-support ventilator. As a result, on average, they live for 3 to 5 years, when the disease reaches the involuntary muscles that control the person’s lungs, rendering them useless, and death ensues. The loss of breathing function is insidious. There is no warning. Most die in their sleep. Some die in an easy chair, while reading a book. I know of one person who died while sitting at his computer, his head resting on the keyboard.  Unlike the COVID-19 virus, which gives warning signals (rise in temperature, chest tightness, coughing), ALS gives no signal of impending death.

There is, however, a silver lining for those afflicted with ALS: it has no effect on the brain or vision. And that brings the ALS patient full circle back to the World with the eye-responsive computer! However, these computers were not available until 2008-09. In the meantime, I had received my tracheotomy in late December, 2003, so I hadn’t been able to speak for a number of years. The computer has become my voice; it has given me the ability to write and thereby communicate via email; and it has given me access to the Internet. With the computer, there is no limit on what I can do with my eyes and my brain. And that is true for everyone with ALS.

Still, in a social settings, the computer becomes a barrier to the normal greetings by a handshake or embracing. Just being confined to a wheelchair makes conversation awkward enough—requiring the other person to lean over or crouch down—with my face blocked by the computer, it’s hardly a conversation starter. In any group setting, I am usually alone with my thoughts or just listening to others’ speaking. Conversation with the computer is just too difficult. Although the quality of life with ALS has vastly improved with the eye-responsive computer, we survivors still feel socially isolated.

Now our country, and the World, is embroiled in the fight for our very lives until we conquer the COVID-19 virus pandemic. This virus was unknown as late as December, 2019. Now, just three months later, over 400,000 Americans have been infected and more than 12,000 have died from this virus. Worldwide, more than one million people have been infected. In the U.S., and many other countries, draconian measures have been taken to curb the spread of this deadly disease: everyone is ordered to stay home except for emergency trips for medicine and food; those who must go out are required to stay six feet apart and wear a face mask or a scarf covering the nose and mouth; schools are closed; business and industry are shut down except where work-from-home is possible; unemployment claims have passed Seven Million; restaurants are closed, except for take-out; theatres and movie houses are closed; the streets of our cities are empty of people and cars. Consequently, with such enforced isolation, virtually all communication is by computers – people across the nations looking at screens.

This pandemic, with its attendant limitations on everyone’s way of life, has forced all Americans to confront a level of deprivation and isolation not unlike what I, and all ALS patients, experience on a daily basis. Just as those with ALS have a sense of being “locked in,” now all Americans, in reality, are being isolated from one another—no touching, no shaking hands, standing six feet apart, faces covered with a mask – are also “locked in” their own bodies.  All ALS patients, including myself, can only get around in a wheelchair pushed by an attendant since we cannot control the joystick on a power wheelchair. In this sense, we have less freedom and less independence than even paraplegics – who compete in marathons!

The quarantined will echo the arc of the ALS patient who is ultimately denied the ability to give or receive comfort or love through the basic experience of the human touch.  As the population becomes more isolated, individuals will gradually lose the ability to converse face-to-face. Communication itself becomes constrained. For the ALS sufferers, that loss is replaced by a computer screen. For the socially isolated due to the viral pandemic, it is eerily similar as they too must communicate on disembodied computer screens. Just as the ALS person moves through pedestrians in her wheelchair, not able to meet the eyes of these who pass by, practicing social distancing also means no longer walking freely among fellow pedestrians; it means diverting one’s eyes and concentrating on keeping a safe distance from others and avoiding communication of any kind.

There is one striking difference between the COVID-19 virus and ALS. The vast majority of people who contract the virus will recover. ALS is a life sentence. There is no cure. Except for a small percentage of instances where the disease is inherited, no one knows what causes ALS. For me, I will press on to my last breath. I have family whom are dear to me and a wide circle of devoted and supportive friends. I have a lot to be grateful for; thanks to technology, unlike Lou Gehrig, I am living a long life.

Thanks to Governor Andrew Cuomo’s morning briefings in April I am reminded during these times of our N. Y. State motto: