Providing a High-tech Device in a Low-tech World.

My first work computer was a Compaq desktop. I inherited it second-hand, from our R&D lab.It was either a 286 or 386 with Windows NT on it. By then our engineers, who loved the old DOS-based systems, had begrudgingly moved onto Windows. I inherited it around 1994 I when the World Wide Web was in television commercials but not yet a real “thing” in common use by the public. It wasn’t until Windows 95 that Web Explorer and access to the World Wide Web was included free in a software package.

I used the PC to write letters and documents which were printed out on a dot-matrix printer. Letters were hand-signed and sent in the US mail since there was no email. It was pretty exciting to me that we had switched from DOS to Windows because there were many more colors available and you could put pictures in documents. Amazing!

Why am I taking this walk down Memory Lane? Because the company I worked for (and still do) was LC Technologies, founded in 1987, and the sole product we developed was an eye-operated computer called Eyegaze. The name Eyegaze is so strongly associated with our company that a few years ago we finally renamed the company Eyegaze Inc.

Before I had a computer of my own, there were people in the US and a handful of other countries who not only owned a computer, but could operate it without ever touching it, solely by looking at a keys on a screen.

The technology was so ahead of its time that the Eyegaze system won the first-ever Computerworld/Smithsonian Institution award for Innovative Use of Technology in the Field of Healthcare and Medicine in 1991. Eyegaze was nominated by Compaq and all 7 of us got a trip to New York City where George Plimpton presented the award to our president. I believe the event was shown live on public television but we have no copy of it. A plaque and a picture of the Eyegaze System was on display in the Smithsonian American History museum for the rest of 1991 and into 1992 until the next award replaced it.

So, here’s the thing that amazes me: people found us without the benefit of modern technology! There was no web to search, yet we got letters in the mail almost daily from people who had a family member who was “locked-in”, unable to speak, or move.  We heard from the families of folks with ALS, brainstem stoke, traumatic brain injury, cerebral palsy, spinal cord injury, muscular dystrophy, and more. The letters came from all over the world. I remember getting one postmarked from Sao Paulo, Brazil, and Tasmania. I still wonder how those people ever found our little company that was operating out of a basement in Virginia.

As a nurse and the medical expert in the company, it was my job to interact with potential customers, and ultimately visit a potential eyegaze user in person to give them a Eyegaze demonstration. Two pieces of technology helped me with my job.  First, fax machines were available, and while many families didn’t have a fax machine at home, most people managed to find one and send me information about the intended Eyegaze user. They filled out a pre-evaluation form, mostly medical information that may have an impact Eyegaze use. There was a lot to sort out in those days, since no one knew how well eye tracking would work for someone with … (fill in the diagnosis of your choice). It was uncharted territory and took several years of hands-on (actually eyes-on) experience to get answers to a lot of questions. Even though the information sheet families sent me often arrived by Fax, the blank forms they received from me typically arrived by US mail.

The second piece of technology that became increasingly valuable was the VCR.  If there were questions about how well a person might be able to use Eyegaze based on the information sent to me, families would send me a short video of the intended user’s eye movements. By observing the eyes I could determine how well someone could operate our Eyegaze Edge®. Not everyone owned a video camera so depending on the situation, it could have taken weeks for the tape to arrive. We owned a VCR, so I could view the tapes, get the information needed, and destroy them afterwards. When PAL format tapes started to arrive from Europe, I made friends with a local company that created videos for advertising.  PAL tapes won’t play on a US VCR, so they allowed me to take those tapes to their office and use their PAL VCR to view the tapes. To communicate back to the European potential Eyegaze user and their family, our amazing fax machine got the job done much quicker than snail mail. International phone calls were quite expensive back then, so not often used

We’ve come a long way since those days. Now in 2021, we can remotely support our Eyegaze users, making modifications to their Eyegaze programs without ever leaving home. Wifi based communication apps that make free international calls, FaceTime, and remote support programs that work in real time are all the bits of technology that make it possible. Last year I participated in remote training and support for a user in Katmadu, Nepal.

We still have a fax machine, but the VCR is long gone. These days videos are filmed and sent from cell phones.  And these days our Eyegaze Edge® users can do pretty much everything we can do on a computer, from controlling their phones, televisions, home control systems and more.  A bunch of Eyegaze Edge® users have written and published over 20 books, using only their eyes, including a novel and a cookbook. Isn’t technology amazing?

To learn more about how far our company has come and what the Eyegaze Edge® is capable of, please visit www.eyegaze.com. 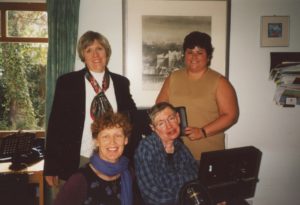