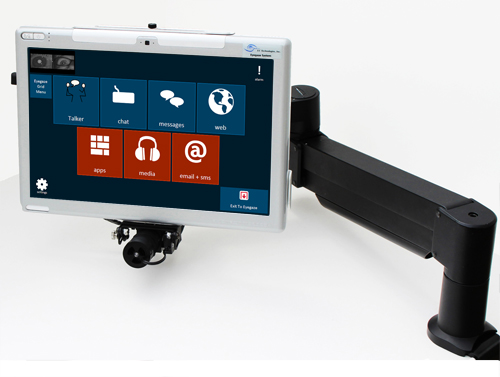 Thanks to the Ice Bucket Challenge campaign’s viral popularity, awareness and donations for ALS have seen a surge that has greatly benefitted those who are living with this disease.

However, there is a new ALS issue which isn’t likely to go viral, but it will potentially affect thousands of people living with this disease and their families. Medicare is reviewing its policies for speech-generating devices; if certain changes are implemented, policy changes could keep many people with ALS from receiving the technology they need to communicate.

Assistive technologies, like our Eyegaze Edge, aren’t devices of luxury or recreation. They are a necessary part of living a full life, despite having an ALS diagnosis. Without these technologies, ALS patients who have lost the ability to speak would be unable to communicate with their loved ones, to express their thoughts and desires, and to do tasks that most of us take for granted – like using the Internet.

Currently, Medicare allows ALS patients to use their own money to upgrade the basic speech-generating devices that are covered through the program. However, according to the Center for Medicare Advocacy, the policy review makes it clear that devices capable of being adapted for non-speech uses (such as email and Internet access) will not be covered at all.

Can you imagine not having access to the vast resources provided on the Internet, or not being able to email friends and family? Access to these technologies literally serves as windows to the world for people who have lost their ability to move and communicate, as a result of ALS.

Several Congress members have signed a letter urging the Centers for Medicare and Medicaid Services to clarify their policies and to identify a “quick resolution” to address ALS patients’ needs. We will provide updates on this important issue as they become available.